Getting it right the first time with iDig 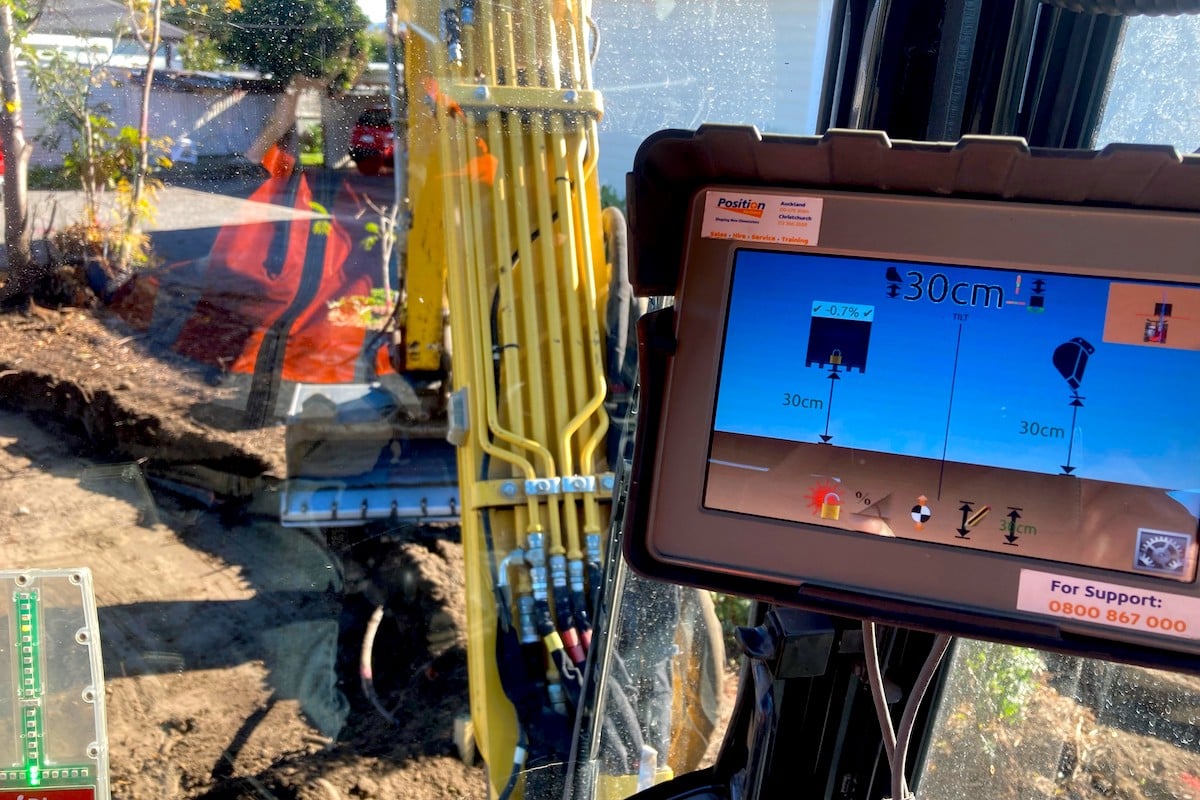 Adding grade control like iDig to your excavator comes with a host of benefits. It saves time by getting you to grade faster, reduces or eliminates overcutting and re-work, and can cut labour costs by negating the need for a grade checker.

However, for many contractors, justifying the cost when margins are tight enough as it is can be a challenge. iDig is a lower-cost, versatile grade checking system that can be fitted to any make, model or size of excavator and works with multiple buckets, including tilt buckets and augers. There are also options for non-centre pivot machines.

“This system is a game changer for contractors that want the benefits of grade control on their excavator but can’t justify buying a full-scale 3D system,” says Troy Howard, from iDig’s distributor, Position Partners.

“This solution is a great option because it is extremely easy to use, reliable and can be swapped between machines in a matter of minutes.”

Blenheim based contractors MultiDIG Services, owned by Jim Duffell, purchased iDig around three years ago to save labour and increase productivity. For operator Joel, at first the system sounded too good to be true. “It sounded almost surreal when I first heard about what it could do, but now I’ve used it for years and I know it really can do everything,” says Joel.

With base kits on both 2.5-tonne and 5-tonne Yanmar excavators, iDig can be swapped between the machines within minutes. “I just have to transfer the screen, the sensors and the LED light bar, it takes no time at all and it’s handy to be able to switch between machines depending on what I’m doing,” Joel says.

iDig can also store different machine and bucket settings so you don’t have to start again when moving between diggers.

Joel says the main benefit of the system is saving time and manpower as he no longer needs to keep stopping to check grade: “I can pretty much complete the whole job, whether it’s digging a trench, doing foundations or levelling a pad, on my own without getting out of the cab at all.”

Before adopting iDig, Joel explains that they relied on laser levels to check the fall, depth and slope as they worked. The problem with lasers, according to Joel, is you’re just spot-checking certain areas, whereas with this system the whole surface is levelled to grade consistently.

“We’re usually finishing floor pad jobs within +/- 5mm accuracy, even though the engineers only require a tolerance of +/- 20mm. That helps the builder out enormously and saves them money as they can more accurately calculate the concrete they need,” he adds.

Setting up each day takes no more than five minutes, Joel explains. For a trench, for example, he simply types in the length, depth and slope required based off a known height on site.

“When I’m doing house foundations, I normally put a few pegs around the boundary of where I’m working, set up to the finish height of the foundations. Then I simply place the bucket on the top of a peg and dial in 305 millimetres down from floor height as the finished level, and the system will tell me how far I’ve got to go as I work,” says Joel.

Joel also uses the iDig system for augering and drilling. He says, “Augering couldn’t be easier, you just dial in your depth and the system will beep when you get there.”

iDig uses a simple combination of wireless, solar-powered sensors, an LED lightbar, a laser receiver, and a large colour touchscreen to take your benchmark into the cab and accurately guide you to your required depth or grade.

As you move the boom, stick and bucket sensors communicate the bucket teeth’s position relative to finish grade, so the operator always knows the level they are working to. If the operator then tracks the machine to dig, the laser receiver references a beam from the laser transmitter to allow the operator to simply carry the level or grade across the job without the need to re-bench.

iDig is a 2D system that delivers real time depth, slope and distance information with a dynamic gyro sensor that unlocks the ability to work on a wide range of tasks including:

Back up and support

Joel explains that getting up to speed with the system and resolving any technical glitches was made easy by distributor Position Partners. “The system is very easy to use and it’s common sense really, the screen steps you through the process, but like any new technology it took me a little bit to get my head around it,” he says.

“We’ve also had to replace the odd sensor over the years or run into a technical glitch, but Position Partners has always been available and happy to help make sure we get back up and running quickly.”

After using the system for around three years, Joel says he uses it for everything except bulking out and demolition work: “It’s an extremely handy and specialised tool, it saves a lot of time and basically eliminates rework, so you get the job done right the first time. Unless of course, you’re given the wrong datum point or foundation height in the first place – iDig doesn’t solve that problem unfortunately!”