First track to be laid on Metro Tunnel 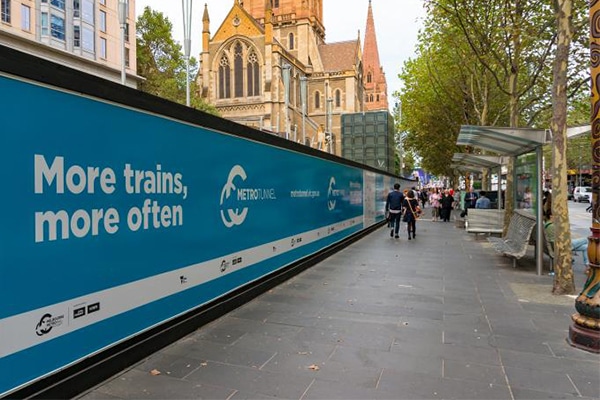 Crews are preparing to lay the first track in Melbourne’s Metro Tunnel project, following the completion of the tunnels.

Work on the rail tunnel and station fit-outs have been ramping up since four tunnel boring machines finished the 9km-long, 6.3m-high rail tunnels in May 2021, excavating more than 600,000 cubic metres of rock and soil.

The first of almost 40km of rail has been delivered to the Metro Tunnel’s western entrance as works gear up to install rail systems and tracks through the project’s twin nine-kilometre tunnels.

Inside the tunnels crews are fixing brackets and cable trays to the tunnel walls to hold electrical and communication cabling in place, as well as installing fire safety pipework and signalling equipment.

Specially designed gantries with bespoke “zero gravity” lifting arms travel along the length of the tunnels on wheels, allowing workers to carefully manoeuvre the equipment into place as they go. These machines make working on the project much safer by reducing the need for manual handling.

Installing the track will take up to a year, beginning with crews laying 4000 precast concrete panels through the twin tunnels. There are 300 different panel shapes to account for the varying curvature and elevation of the tunnels as they wind from Kensington to South Yarra up to 30 metres underground.

From mid-2022 crews will install 165 metre lengths of steel rail, progressively clipping them to the concrete panels and welding them together to form a continuous rail line along the length of the tunnels.

Once overhead power and the new high-tech signalling is installed in the tunnels and stations, along with more than two kilometres of platform screen doors, testing will begin in the tunnels with Melbourne’s new fleet of bigger, more modern trains in 2023.

“Whether it’s building schools, hospitals, upgrading roads or building the Metro Tunnel – we’re delivering our promises and getting things done.”