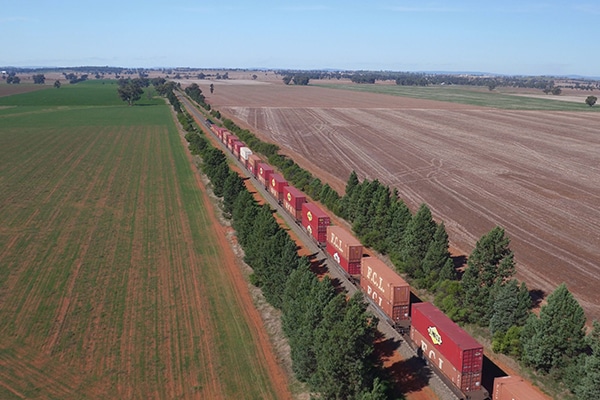 The call comes after a study by UK-based clean-energy group Smart Ports and Arcadis showed hydrogen will not only be cheaper than diesel within a couple of years but, if used to power rolling stock on the route, could potentially strip 763,000 tonnes of CO2 from Inland Rail operations each year.

Ammonia cracking involves converting hydrogen to liquid ammonia, transporting ammonia in tanks, then re-converting – or cracking – the ammonia back to hydrogen at the point of storage and use. The process overcomes challenges associated with transporting hydrogen in a compressed gas or a cryogenic (extremely low temperature) liquid form.

The Arcadis study showed that if the cracking technology was used on the inland Rail, a single Inland Rail journey from Melbourne to Brisbane would be cheaper using hydrogen than diesel from around 2024. A diesel-fuelled journey would generate some 87,100 kg of CO2, which would translate to a potential rail-related saving of 763,000 tonnes of CO2 per year.

Arcadis Clients Director – Resilience, Luke Keys, said that the consortium’s work showed that hydrogen was a feasible option for decarbonising the rail link.

“Hydrogen will be cheaper than diesel and will practically eliminate carbon emissions from freight movements,” Keys said.

“It will be up to rail operators to select their fuel source but, inevitably, the pressure will be on them to switch to clean fuels. The design of the rail link must therefore allow for ammonia and hydrogen fuel to be easily stored and accessed along the route,” he said.

“The time to do that is now, as fuel transfer and storage requirements are built into the initial design and construction stage of the project. It will be much more expensive to retrofit fuel infrastructure to accommodate future fuels once the project is up and running,” he said.

The Smart Ports and Arcadis work on Inland Rail draws on the work of CLARA Energy, a company developing two large-scale green hydrogen projects in Australia whose consulting team includes Arcadis and PwC. Separate development work by CLARA Energy conducted by PwC shows that based on the decline in production costs from 2022 to 2032, green hydrogen will become a viable alternative to diesel for domestic use and international export over that time.