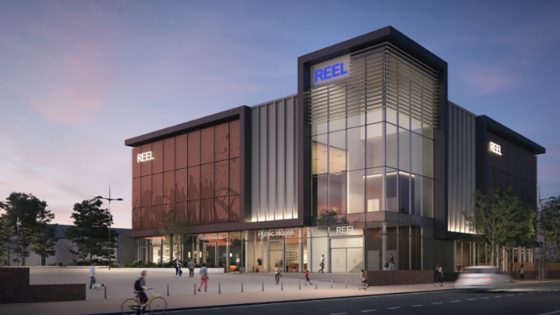 High interest rates are affecting the viability of construction schemes around the UK, with one council pausing a Morgan Sindall project and another reconsidering its £1bn infrastructure programme.

A mixture of recent political turmoil and soaring prices has forced the Bank of England to hike interest rates steeply, with the base rate rising to 2.25 per cent in September, having been 1.75 per cent in August. It has been widely predicted that interest rates could reach 5 per cent.

The rising interest rates are having a real impact on construction projects, as clients face soaring costs and consider scrapping plans.

Knowsley Council announced last week that it was pausing the construction of a large cinema project (pictured), which was to be delivered by Morgan Sindall, due to the interest-rate hike.

The council was borrowing money to finance the project, based in Kirkby, the repayment of which, it said, would be funded by rents charged to the cinema and businesses occupying the space.

However, the council has since had to “reluctantly” pause the scheme due to the high cost of borrowing. It estimated that the scheme’s price had been pushed up by £5m.

Based on interest rates in early 2022, the council said it would have broken even on the scheme. But the current and forecast rise in rates would mean delivering the project at “a loss to public funds”, it added.

Knowsley Council’s regeneration and economic development cabinet member Tony Brennan said: “We planned to start the scheme before the end of this year and now we face having to wait for markets to calm and for greater economic certainty.

“Our own council budget is already significantly stretched, and the government is already hinting that there may be further cuts to public spending coming soon. This would only make our financial situation even harder.”

The council clarified that it remained committed to the scheme and would restart work “once the financial picture improves”.

The plan to create a new cinema with associated food and drink outlets is just one part of Knowsley Council’s multimillion-pound investment to develop Kirkby town centre.

Meanwhile, in Scotland, a council has warned that high interest rates could dent future budgets for “decades to come”.

Highland Council explained that the “ongoing financial crisis” would impact its decision-making around construction projects that are part of its previously approved Capital Programme.

Last December, members of the council approved a 15-year capital plan with a total value of nearly £1bn, which pledged investment in schools, roads and flood schemes.

In a recent statement, it said rising interest rates posed a “risk to future revenue budgets for decades to come”, adding that the “volatile” rates were making it “difficult to predict the future”.

It added that the Capital Programme was being affected by cost pressures arising from the high level of inflation, the shortage of products and materials, and the lack of availability of contractors and subcontractors.

As an example, it said that the construction of a primary school in the region would cost 121 per cent more if the rate reached 5 per cent.

The statement said: “The total cost payable for a primary school project financed by borrowing costing £15m at a 2 per cent interest rate would have been £22.9m.

“If the capital cost of that project has now risen to £20m and with interest rates [at] approximately 5 per cent, the overall project cost increases to £50.7m – an increase of £27.8m, and more than double the original payback cost.”

Highland Council leader Raymond Bremner said: “We can’t underestimate the wider impacts of the present fast-moving financial crisis we find ourselves in.

“When the current programme was set in December 2021, interest rates continued to remain at historically low levels and, on average, long-term borrowing for up to 60 years could be obtained at an interest rate of around 2 per cent.

“There is much in the Capital Programme we need and want to progress. However, this is a phenomenal situation, which has the potential to worsen in the coming months. It is imperative that we have a full understanding of the long-term consequences of any decisions we make.”