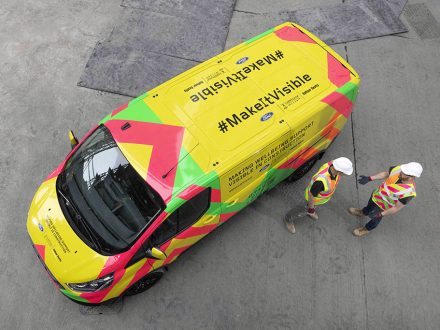 The Make it Visible campaign provides mental health experts from Lighthouse Club with specialised vans to get to construction sites. They have also been given specially-designed high-vis jackets to wear when visiting sites.

The initiative, which launches this week, has been piloted on a Balfour Beatty site.

According to Ford, their vehicles account for almost one in three new commercial vehicles sold in 2021 in the UK and Ireland, with a potentially higher percentage in the construction industry. It plans to make use of this access into the industry to help more workers with resources for their wellbeing and mental health.

“These highly distinguishable vans will be visiting sites across the country to deliver visible support to the boots-on-the-ground workforce. The vehicles are manned by the Lighthouse Club’s on-site team who are all Mental Health First Aiders with relatable experiences in the construction industry. I am convinced that this initiative will have a positive impact on workforce wellbeing and ultimately save lives.”

She added: “We must change this incredibly outdated perception – and, at Balfour Beatty, we are continuing to lead the charge.”

Construction workers are 3.4 times more likely to take their own life than workers in other jobs.

According to Office of National Statistics (ONS) data, suicides among unskilled workers in construction rose to the highest record for a decade in 2020, when 94 workers died. Skilled construction has seen a slight decline in suicides, but still has the highest deaths among all other ONS occupation categories.

A major issue with reaching the construction industry with the message of mental health support has been the vastness of the supply chain and the difficult of reaching those at the very bottom of it.