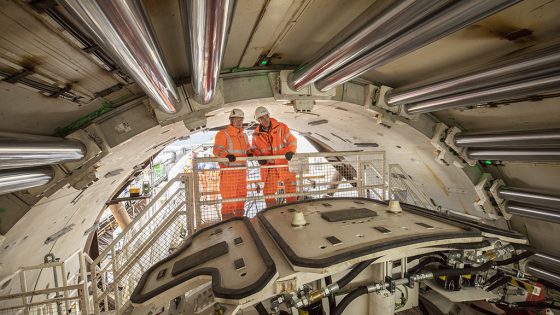 HS2’s decision to use a government electricity framework has cut the price it pays for energy by approximately 10 per cent.

The multimillion-pound high-speed rail project opted to use a government framework to buy in the electricity it needs to power machinery used on phase one of the build, which will run between London and Birmingham.

Use of the Crown Commercial Services Framework has enabled it to bypass the soaring energy prices set by suppliers, which have hit contractors across the country since the Russian invasion of Ukraine contributed to rocketing energy costs by pushing up gas prices.

HS2 estimated that using the framework resulted in it securing electricity at between 9 and 12 per cent below the open market price.

“We had a choice,” HS2 civils directory director Mike Lyons told Construction News. “We could have gone out to market, as other businesses do, or we could have used the government framework.

“That was the most cost-effective way for us to do it because we are buying so much electricity.”

Electricity powers all five of HS2’s tunnel-boring machines (TBMs) that are up and running, in addition to cranes and other machinery.

Despite the market being “volatile”, Lyons explained that buying “smartly” via the government framework had kept electricity costs “as efficient as possible”.

He declined to state a figure of how much was saved by buying via the framework, saying it was too early to know.

Lyons was speaking to Construction News as HS2 launched its fifth TBM, this time from its West Ruislip site in West London. A joint venture of Skanska, Costain and Strabag (SCS JV) is leading on that section of the route.

Known as Caroline, the 2,000-tonne machine will travel five miles to Greenford over a 22-month period. Sushila, which launched earlier this month, is also at work on the same section of the tunnel.

Many businesses in the construction industry have been struggling to cope with a spike in electricity prices since war broke out in Ukraine in February. “While we have seen energy prices go up, which has been a challenge for us, and is still a challenge in the wider industry, at HS2 we have tried to apply some of those efficiency statements all the time and they have helped us reduce costs,” Lyons said.

The electricity is provided by an electrical substation installed at the site, according to HS2 Ltd.

TBM Caroline will install more than 4,200 tunnel segments on the route, 1,600 of which have already been manufactured. The machine measures 140 metres in length, and will be dismantled and extracted from a 40 metre-deep shaft once the route has been completed.

The TBM will remove about 2 million cubic metres of material, all of which, apart from a 1.5 metre-thick wall, will be reused on site, Lyons said.

HS2 is due to launch two TBMs from Victoria Road to Greenpark Way in 2023, while a further two machines will bore a 4.5-mile tunnel from Old Oak Common and Euston.

In total, 10 TBMs are working on phase one of HS2, the first of which, Florence, set off in May 2021. Florence and Cecilia, which was launched last July, are tunnelling a 10-mile stretch below the Chiltern Hills.