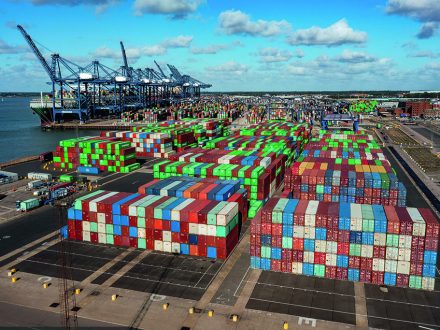 The construction supply chain looks set for further disruption as workers at the Port of Felixstowe, the UK’s largest container port, confirmed eight days of strikes starting later this month.

About 1,900 workers will down tools on 21-29 August in a dispute over pay, which could worsen supply-chain issues facing the sector.

Workers at the Suffolk port were offered a 7 per cent pay rise by Felixstowe Dock and Railway Company, but rejected the proposal, calling it “extremely disappointing”. An initial offer of 5 per cent had been made previously.

Unite has warned the strikes will cause “huge disruption” and “generate massive shockwaves” through the UK supply chain.

The strikes threaten further disruption to arrivals of materials to construction sites, and follow previous supply issues caused by events such as the war in Ukraine and the COVID-19 pandemic.

This follows a summer of train strikes, which saw operations on HS2 disrupted as material deliveries had to be rescheduled.

The first day of strikes will take place on Sunday, 21 August, with the action running for eight days until Monday, 29 August.

“They are fully able to pay the workforce a fair day’s pay. The company has prioritised delivering multi-million-pound dividends rather than paying its workers a decent wage.”

Felixstowe is the UK’s largest container port and 48 per cent of containers brought into the UK are transported via the port, according to Unite.

The group has said that strike action will have a “huge effect” on the UK’s supply chain, affecting the logistics and haulage sectors, in addition to severe disruption to international maritime trade.

Unite national office for docks Bobby Morton said: “Strike action will cause huge disruption and will generate massive shockwaves throughout the UK’s supply chain, but this dispute is entirely of the company’s own making. It has had every opportunity [to] make our members a fair offer, but has chosen not to do so.”

Construction Products Association deputy chief executive Jeff May previously warned the strikes could present a new factor in a series of issues that have affected the port.

He said: “Felixstowe has struggled to get on top of a wide range of issues impacting deliveries for several years now.

“Since 2021, our members have responded by increasingly relying on other ports, such as Tilbury. And, while some sectors such as bathroom and electrical goods continue to suffer serious problems with shipping en route, in general, the issues around availability of imported products have improved from a year ago.”

He added: “Any strike action would exacerbate existing strains on the construction supply chain going into [the] second half of the year, when space for deliveries of construction products competes with other consumer goods for the holiday season.”

A spokesperson at Felixstowe port said: “The port has not had a strike since 1989, and we are disappointed that the union has served notice of industrial action while talks are ongoing. The port provides secure and well-paid employment, and there will be no winners from industrial action.”