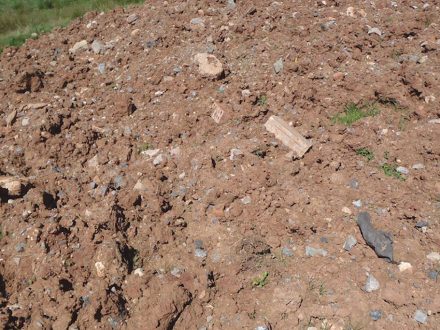 A Welsh plant-hire company has been fined £13,000 for the illegal disposal of construction waste on common land in southeast Wales.

Bob Gay Plant Hire Ltd, a company from Pontypridd, has been found guilty of dumping 2,900 tonnes of soil and construction waste on Eglwysilan borough common in Caerphilly.

The firm had been directed to dump the waste on the public land by Terry Jones of Pen-yr-Heol Las Farm. Although Jones had registered a waste exemption at his farm to use waste in construction, this did not cover the neighbourhood common.

Moreover, the quantity of waste materials disposed of was in excess of the 1,000 tonnes permitted to be stored for Jones’s future use. In fact, some 2,900 tonnes were found to be deposited illegally between March and July 2020.

The plant-hire company was prosecuted by Natural Resources Wales (NRW), which is a government-sponsored body that manages and maintains natural resources in Wales.

The judge also heard that the final deposit was made after NRW had carried out an initial investigation and had asked Bob Gay Plant Hire Ltd not to continue in the same way. Therefore, the judge deemed the final deposit in July 2020 to be a deliberate move by the firm.

He added: “We will prosecute those who seek to profit by breaking the law and whose actions undermine legitimate businesses operating within the waste industry. We hope the outcome of this case sends a clear message that we will always take the appropriate steps to protect people and nature, while also protecting the marketplace for legitimate operators.”

Aled Owen, from law firm Harrison, Clark and Rickerbys, the solicitor for Bob Gay Plant Hire Ltd, said the case was one of many in the haulage industry that  highlighted the need for the industry to provide greater clarity as to the application of agricultural exemptions.

He said: “Bob Gay Plant Hire were contracted to move soil under agricultural exemption. The purpose of moving the soil was to improve the land to create pasture for sheep. The farmer’s exemption was not sufficient for the purposes required and because of that a regulatory breach occurred. The company pleaded guilty immediately and remediated the land with [the] agreement of NRW.”