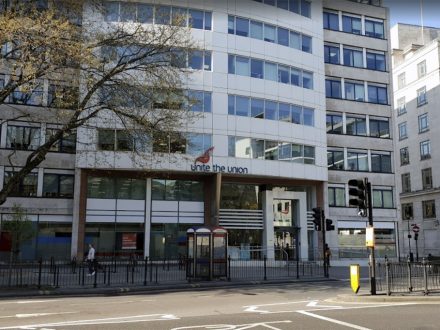 Unite the Union’s headquarters in London were raided by police this week in relation to a financial crime investigation involving the construction of a hotel and conference centre in Birmingham.

Sky News reported that between 15 and 20 officers were involved in the search of the office building in Holborn (pictured), and left with boxes of documents and a computer.

The raid was a joint operation by South Wales Police and the UK’s tax authority, HMRC. A spokesperson for the force said it had carried out the search to investigate allegations of bribery, fraud and money laundering.

In 2016, Unite appointed Flanagan Group to build a 170-bed hotel in Birmingham called the Unite Hotel and Conference Centre. Construction costs for the project proceeded to rise by £41m, resulting in a £98m build, which was completed in December 2020.

The union’s then-general secretary Len McCluskey told a meeting of the Unite executive council in January 2021 that costs had risen because of its abidance to union protocol, which meant employing workers who had union membership, avoiding the involvement of firms that had a history of blacklisting, directly employing workers and paying them at least national pay rates. The union’s executive committee concluded that the directly employed labour, high construction costs in Birmingham and a change in project scope pushed up the price.

In April 2021, Labour MP Neil Coyle, also a member of the union, questioned the mismanagement of funds for the hotel project and called for an inquiry. In December, newly appointed general secretary Sharon Graham launched the investigation.

Unite the Union is one of the largest trade unions in the UK with 1.2 million members, including workers from the construction industry. The Birmingham project under scrutiny included a Marriott-branded hotel, conference space, education centre and offices for the union.

A Unite spokesperson said: “A Unite employee is subject to a criminal investigation by the police. On Wednesday 6 April, the employee’s office at Unite HQ in Holborn, London, was accessed and searched by the police under warrant.”

South Wales Police said that in addition to London, warrants were handed out in South Wales and the police-force areas of Merseyside, Cheshire, North Wales, Dyfed-Powys and Northamptonshire.