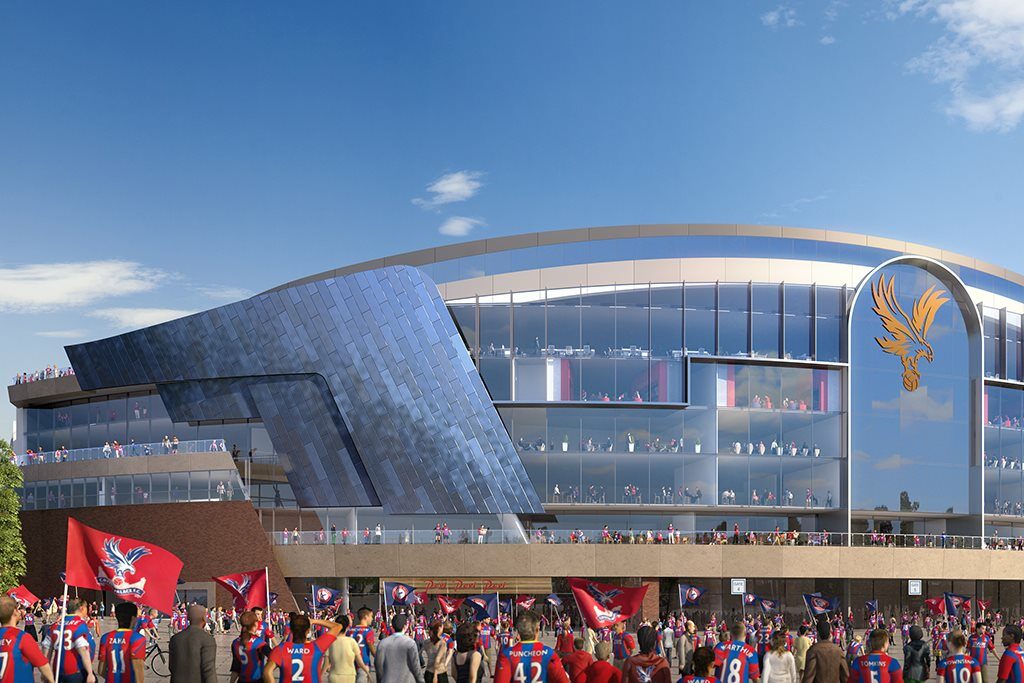 The Premier League team originally gained planning permission to revamp its Main Stand in April 2018, which will add 8,000 seats to the south London stadium – taking the capacity to 34,000 – and cost between £75m and £100m.

Last month the club put forward amended proposals after advice from a fire engineer, which led to designers KSS adding an extra evacuation lift. They also increased the number of partitions to separate lobbies within the stand.

The changes meant the plans required fresh approval before planning permission could be granted by the London Borough of Croydon council, together with the signing of Section 106 agreements and approval from the Mayor’s Office.

These were unanimously approved by the council during a planning committee agenda meeting yesterday (20 October).

The committee report concluded that expanding the stadium would “ensure the ground remains the long term home” of the club, calling it an “important economic, cultural and social institution” in the area.

“The proposed development is of exemplar design, which would positively contribute to the character and appearance of the area, forming a new landmark. No heritage harm would be caused by the development,” the report added.

The application will now be referred back to the Greater London Authority under the Stage 2 referral process for an updated decision from mayor of London Sadiq Khan, before a final decision on the stadium is made.

As part of the agreement with the council, the club must replace six affordable homes which would be demolished as part of the works. Five of the replacement homes will be purchased by the council.

Residents in the affected houses would need to be given 12 months’ notice to move out of their homes. The club will also have to buy land owned by major supermarket brand and neighbour Sainsbury’s to be able to complete the project.

Commenting on the approval of the revised plans, Crystal Palace chairman Steve Parish said the redevelopment would “breath[e] new life” into Selhurst Park.

He added: “We would have liked to have started the project sooner, but our plans were delayed by financial constraints caused by the COVID pandemic.

“It has long been our ambition to extend and modernise Selhurst Park, making it a home fit for the 21st century.

“We are looking forward to getting started on the project. There is a lot of preparatory work to be done in the coming months and we will update on a likely timetable in due course.”

A statement released by the club yesterday revealed the full extent of the changes to its plans to expand the stadium following advice from a fire engineer. They included:

Revisions to the landscaping scheme, involving landscaping and “sustainable drainage”, were also included following advice from a security consultant. None of these changes will alter the size or scale of the scheme, the club said.

The Main Stand development at Selhurst Park, which has been the club’s home since 1924, will also see the club develop 550 square metres of restaurant and retail space.

It will allow the club to extend the pitch by around four metres, to give it the dimensions needed to host international matches.

Crystal Palace is one of a growing number of Premier League clubs seeking to expand their stadiums.

Liverpool got the green light for its £60m expansion plan last June, which will add 7,000 seats to its Anfield Road stand, while Leicester’s expansion plan got approved by the council last month.

Everton got assurances in June that a US consortium would fund the completion of its new £500m stadium in Bramley-Moore Dock, which is being built by Laing O’Rourke.