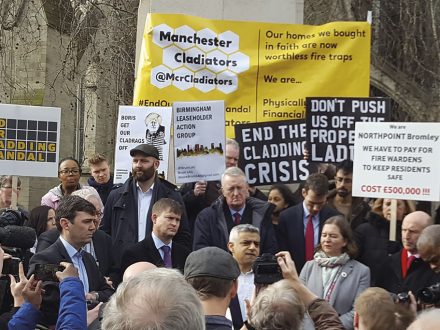 The governments of Wales and Scotland have expressed concern that they have been frozen out of plans to fund the remediation of medium-rise buildings.

Leaseholders in medium-rise buildings remain in limbo in Scotland, Wales and Northern Ireland, as central government plans to remediate those buildings do not extend to the devolved nations.

The administrations in Scotland and Wales have told Construction News that they had expected access to funds newly raised through developer pledges – which housing secretary Michael Gove said totalled more than £2bn – to remediate dangerous materials on buildings of between 11 and 18 metres in height.

In recent months, 35 England-based developers have signed a pledge to remediate buildings up to 30 years old that are within that height range. In doing so, the developers promised not to finance the work through the taxpayer-funded Building Safety Fund (BSF), which was established to pay for the remediation of buildings over 18 metres tall.

Gove also warned that he was considering barring companies from public procurement opportunities if they failed to sign up to the agreement; pursue them in the courts; or ban them from selling homes.

The government in Westminster is obliged to commit a proportion of public expenditure to the devolved governments of Wales, Scotland and Northern Ireland according to the Barnett Formula. But the latest developer pledge is not devolved in scope, as it involves developers in England paying to fix their own faults rather than paying into a centralised pot. The pledge scheme was devised despite what a spokesperson for the Welsh Government described as “repeated” calls for a UK-wide solution to unsafe cladding.

The devolved governments faced a similar problem with the £5.1bn BSF, as revealed by CN in July 2021. At the time, it was reported that, five months after more funding was committed to remediate high-rise buildings through the BSF, the devolved governments in Wales and Northern Ireland had still not been told whether they would receive devolved funds. CN understands that the devolved administrations have continued to press for the money but, as of the latest Scottish Government update in February this year, had yet to receive clarity on how much the payouts would be or when they would be received. CN has approached each of the governments for clarification.

A spokesperson for the Scottish Government said that it had engaged “in good faith” with the UK Government over a resolution that would involve all four nations. “Therefore, we are very disappointed in the England-only approach taken by the UK Government’s creation of the developer [pledge],” they added, saying they were considering ways of funding the remediation work within their own means.

In Wales, the government has committed £375m for remediation work over the next three years, which would go beyond cladding defects. “We will continue to work with the construction sector in Wales to ensure their fair contribution towards fixing fire-safety issues,” the Welsh Government spokesperson said.

A spokesperson for the Northern Ireland Department of Finance (DoF) said it was “working with” the Department for Levelling Up, Housing and Communities to come up with a solution for medium-rise buildings in need of remediation.

They added: “Details of high-rise properties with unsafe non-ACM [cladding] were passed to the Department for Communities, which is continuing to scope a non-ACM scheme with support from DoF.”

The UK government has also put forward plans for a Building Safety Levy, which will be chargeable on all new residential buildings in England. Gove said the levy is needed to stump up an additional £3bn to remediate so-called orphan developments – buildings for which the developer cannot be traced. It is understood that the levy also does not apply to the devolved governments.

A UK Government spokesperson said the agreement with developers means they will pay to fix the problems they created. “Building safety is devolved and we continue to work closely and collaboratively with the devolved administrations, including the Scottish Government, on the concerns raised,” they added.

The proposal for a Building Safety Levy is included as part of the Building Safety Bill, which is currently making its way through parliament. The government hopes the bill will be enacted in 2023.