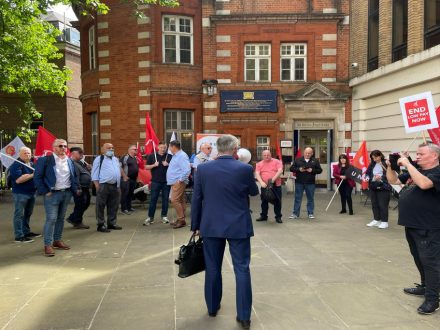 Dozens of construction workers gathered in central London on 18 May to protest at what they call a “derisory” pay offer from the Construction Industry Joint Council (CIJC).

In February, the Unite union demanded a 10 per cent pay rise for about half a million construction workers, arguing that the increase was necessary to meet higher living costs and attract more workers.

The group – one of two union representatives – also asked for increased sick pay and holiday entitlement to match levels in other construction pay agreements.

However, the workers protested outside a CIJC meeting after receiving a lower-than-expected pay offer from the council, understood to be less than 4 per cent, which is less than half of what they’re demanding.

The GMB has repeated calls for a 10 per cent wage rise, warning that a failure to increase pay could push more workers out of the exit door as the cost of living crisis takes hold.

It comes as Construction News reported this week that businesses in the industry paid out record bonuses in March in a bid to retain workers.

The GMB said it was waiting for an improved offer from the CIJC and has given the group a deadline of June 28 to settle the pay dispute.

GMC national officer Charlotte Childs said: “The construction industry is facing an unprecedented skills shortage. Without meaningful improvements to the CIJC agreement, which sets out the minimum rates for all grades covered by the agreement, the shortage will likely worsen.

“The CIJC needs to show leadership in setting the appropriate rates for this highly skilled and highly motivated workforce – not this derisory offer.

“Our members are here today, ahead of pay negotiations, to demonstrate the strength of feeling amongst the workforce.”

The CIJC represents a large number of building and civil engineering groups, and governs the pay and conditions of about 500,000 workers (principally those in civil engineering and the biblical trades). It is responsible for setting pay rates.

Vacancies within the sector reached a record high of 48,000 in the three months to October and worker availability is expected to be a persistent issue this year.

Last month, London mayor Sadiq Khan called for temporary construction worker visas to be introduced to alleviate the worst of the labour crisis.